Travel within Japan is quick and convenient, but it can take some getting used to.  Tokyo especially has trains, monorails, the Shinkansen, taxis, boats, and tourist things like rickshaws.  Most of these places will have signs in English, some will not, especially the smaller stations.  You can read more about that here.

So have fun figuring this out.

The ticket kiosks accept all kinds of denominations, even up to the equivalent of a $100 bill in Japan.  There will be a sign overhead with a map of the stations and the ticket price, and you buy that price ticket.  You can also get travel cards that you put money onto at kiosks near the station.  Those should work on most buses and gives you a readout of what you have left when you use it. 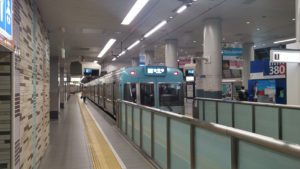 A train on the platform at Shibuya Station.

For most of you, the Japan Rail Pass will make a lot of sense, especially if you plan on riding between major cities or have any plans to take the Shinkansen.  Since I lived in Japan I could not use it (they check passports for visas) but based on the prices I’ve seen it can be a no-brainer for some.

There are quite a few companies out there who offer the pass.  They can be easily found via Google.  The pass is shipped to you overseas, I believe, so you must have it before you arrive.

Taxis are everywhere in Japan, and I mean everywhere.  You’ll see them lined up on the streets in front of stations, tourist areas, night club areas, etc.  They’re expensive and usually start at about $6 for the flag drop.  A 15-minute ride could cost you $20 so be careful.  Also, the rates go up at night, so a long home in the middle of the night will set you back well over $100.  In case you haven’t heard, the driver has a level that opens the door for you.  He’ll open it if he sees you.  If he doesn’t, just knock on the window.

Below is a video of a train ride though central Tokyo:

Please see the comment area below for additional information.